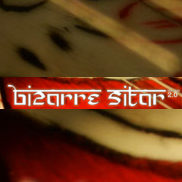 Producers and composers looking for premium performance and sound from an exotic beautiful instrument, for their tracks , score and multimedia projects!

The Bizarre Sitar may not seem so strange at first glance. It has most of the elements found on any other sitar, with it’s traditional gourd body, both main playable strings and sympathetic resonating strings, parda (adjustable curved frets), kunti (tuning pegs), dandi (neck), ghoraj (main bridge) all complete with orante hand-painted accents.

The Bizarre Sitar may not seem so strange at first glance. It has most of the elements found on any other sitar, with it’s traditional gourd body, both main playable strings and sympathetic resonating strings, parda (adjustable curved frets), kunti (tuning pegs), dandi (neck), ghoraj (main bridge) all complete with orante hand-painted accents.
At just over 24″ in length, however, this little beauty is barely half the size of a standard sitar. Simply being small isn’t bizarre by any means, but what is bizarre is how it can achieve such a lush, full-bodied sound while being so small. Intended as more decoration than instrument, we feel this little guy has been highly underestimated. Although soft-spoken and possessing fewer strings than normal (5 main and 6 sympathetic), all this “baby” sitar needed was someone to listen closely. And we did. Very close.
At the heart of our Bizarre Sitar library are the strumming patches. Two main strumming tunings are included, a fifth and and octave/unison. An onboard “Speed” knob (MIDI assignable and defaulted to the modwheel) allows you to sculpt the speed of the individual strum from very tight, fast strums to slower, plucky strums. The strums are tuned and spread across the entire keyboard, providing deep, droning sounds in the low end and sharp, mandolin-like plucks in the high end. In addition, we’ve also included individual string plucks for lead lines and accents.
Special combo patches give you both plucks in the high end and strums in the low-end for easy playability. Also included are a number of effects (fret scrapes, mutes, etc.), staccato bowing, tremolo bowing and sustained bowing. As usual, there are several ambience drones comprised entirely of source material from the bizarre sitar library. Combined with our custom front panel controls and included tone / effects controls with custom reverb convolutions the Bizarre Sitar library is extremely flexible and versatile.

Functionality
The main focus of this library is the strumming. The unison articulation was tuned with strings in unison and in several octaves to give a very full sounding strum. The fifth articulation was tuned with strings in unison and in fifths, similar to the Pancham-Kharaj tuning popularized by Ravi Shankar. By recording several different strumming speeds for both the fifth and the unison strumming articulations, this library allows you to create realistic sounding strums by adjusting the speed in real-time.
The pluck articulation is included for lead lines and accents. The first string on the sitar was recorded in several different tunings with multiple velocity layers. The natural tendency of this instrument is for the pitch to be slightly sharp on the initial attack and bend down gently over time. The effect is increased in the higher velocity layers.
Though not traditionally bowed, we decided to include several bonus patches of bowed sitar: sustain, staccato, and tremolo. The tremolo patch features an “intensity” knob to adjust through three different intensity layers and a “Speed” knob to adjust the playback speed of the tremolo samples. This allows you to more closely match a specific tempo or crank it up and go crazy.
The included Convolution Reverb effect features 74 select custom impulse responses recorded from some of our favorite locations. Among those are also fx impulses which are more special effect than reverb.
Deep Sampled Articulations

4 Main Articulations:
NKI Program Presets
This library is designed for the full retail version of Kontakt 3.5 or later (Kontakt 4 is also supported). We’ve included 25 Kontakt 3.5/4-compatible nki programs, featuring automatable attack, release, offset, swell, tuning, key-switching, EQ, convolution, and a full range of other effects controls. There are 3 main strummed patches, 1 plucked patch, 3 combo plucked/strummed patches, and 3 bowed patches including sustaining, staccato and tremolo.
Several presets also include our Uberpeggiator system, which allows both simple and complex free-form and rule-based arpeggiations and sequences.
All plucked, strummed, bowed and ambience patches are tuned and spread across the entire keyboard range in Kontakt.
The FX section provides 7 preset patches with specially dialed in effects to demonstrate the power of our custom controls, convolution reverb impulses and pre-loaded effects. Also included are fret scrapes, strum mutes and other effects.
Included is a set of ambient drone patches created from bizarre sitar source material. There are four master patches with a Pro-53 filter engaged and assigned to the modwheel. A cross-fade patch is included to blend between the first three ambiences (cross-fade assigned to the modwheel by default).
Important Note:
Native Instruments Kontakt version 3.5 or 4 full retail version of Kontakt required to use all .nki instrument program presets included in this library. The free Kontakt “Player” does not support this library.
System Requirements:

Producers and composers looking for premium performance and sound from an exotic beautiful instrument, for their tracks , score and multimedia projects!

When ordering the Download Version you will be able to download the content of "Bizarre Sitar" directly to your computer: This product contains 1 compressed rar file. You can extract rar files with extract utilities such as WinRar (PC) or Rar Expander (Mac).