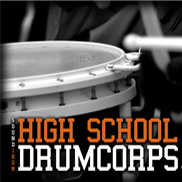 Producers, DJs and musicians looking for pristine multi-sampled drum kits for Kontakt in a variety of contemporary genres.

The Soundiron High School Drumcorps is a professional multi-sample drum library focused on capturing the powerful, tight sound of high school marching band drum line. There’s a certain unique punch to those hard mid-tones with that truncated dry snap of marching snares and bass drums. It’s quite distinct from the solid, pleasing punch and smooth resonance of typical rock, jazz and symphonic percussion.

The Soundiron High School Drumcorps is a professional multi-sample drum library focused on capturing the powerful, tight sound of high school marching band drum line.
There’s a certain unique punch to those hard mid-tones with that truncated dry snap of marching snares and bass drums. It’s quite distinct from the solid, pleasing punch and smooth resonance of typical rock, jazz and symphonic percussion.
These drums are meant to be heard loud and clear from a great distance, delivered with the staccato precision of a military formation.
Mike was a percussionist back in his youth. To capture this library, he returned to his old alma mater, the MSJ Marching Band 15 years later to capture the feeling and sound of playing in a high school marching drum corps for this library.
With the help of Director Monica Kraft and Drum Instructor Steve Slater, along with 12 members of the band itself, we recorded close, with a wide stereo array.
Our goal was not simply to capture the sound of watching the band from the bleachers, but to put you right there in the drum line yourself, all the way from rehearsal to the big game.
To do that, we recorded the drum line in both a large indoor band hall and an open-air outdoor football field environments to provide you more freedom and really put you right in the action. The hall has a live room wetness, while the field position has a much drier sound, with a subtle echo and natural environmental background.
The indoor version was recorded in a wood, tile and fabric surfaced band rehearsal hall. The outdoor recordings were done on the stadium field, so there are occasional stray sonic elements buried in the sound from the outside world.
We’ve also done some live marching bands and parade ambiences to really put you into the action when a bit of sound design is called for.
This library has all the flavor and verve of a classic high school marching band drum line, with plenty of pop, crack, whump and boom to bring a little more life into your tracks.
Functionality
For the completely new version 2.0 redesign, we’ve added a full user interface and powerful new arpeggiation, ensemble building, room simulation, tone and articulation shaping features, providing you total control over every aspect of the sound and performance.
We’ve also brightened and tightened the sound and added more flexibility to the bass and snare roll and crescendo articulations.
The original 1.0 version of this library was originally released under the Tonehammer brand name in 2008.
This library now includes the powerful Megamixer interface, allowing you to create custom ensembles with up to 12 drums, with individual key-mapping, tuning, panning, release control, shaping and mixing and dynamic sample loading for optimal resource use.
It also includes a specialized version of our Uberpeggiator arp system, with a new “EZ-Roll” mode that allows dynamic bpm-based roll creation, with velocity swelling, humanization control and much, much more.
There are 2 Marching snares, and 5 tuned marching bass drums (20″ – 36″) for the field recordings, along with quads in the indoor and outdoor ensemble strikes and rim clacks.
The indoor recordings feature the same snares and a large 48” concert bass drum which has been in continuous use by the band for over 30 years.
The head of the concert bass drum is made of cow hide and it’s played with a large, soft cloth and felt mallet, providing a deeply massive sub-sonic boom.
For the full drum line there are flam and rim strike articulations with all instruments playing in unison (snare, bass drums, quads).
Specs

Producers, DJs and musicians looking for pristine multi-sampled drum kits for Kontakt in a variety of contemporary genres.

When ordering the Download Version you will be able to download the content of "High School Drum Corps" directly to your computer: This product contains 1 compressed rar file. You can extract rar files with extract utilities such as WinRar (PC) or Rar Expander (Mac).