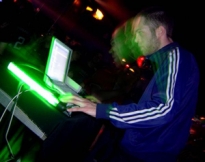 Alex Menzies (aka Alex Smoke) is an exceptional talent to emerge from the Glasgow music scene. At a young age, Alex is already pushing boundaries with his unique approach to electronic and dance music. Classically trained as a musician his arrangements although often experimental show balanced amounts of intelligence and emotion.

Since his first release Incommunicado in 2005, Alex gained the critics attention and praise, and continues to capture audiences with his remix works (Depeche Mode, Steve Reich, Junior Boys, Funk D Void, Radio 4, among many ), albums and dj sets around the globe.

FL – What are your main music influences? What drove you into electronic music, more particularly, techno and minimal?

I was brought up with classical music, playing cello and singing in a choir so that is still very important to me, especially choral music. But at school I discovered hip hop and techno, listening to shows on the radio, and I felt an instant affinity with it. Once I bought a computer i realised I could just make the music in my head, so I quit University and just focussed on making music. It took me several years to get good enough to release it but I had a strong sense that i could make it so I just persevered.

FL – Do you use samples in your productions?

I´ve never been one for using loops and samples to be honest! I always liked the idea of creating from scratch as that is where the flexibility and fun is. But I used a drum break loop from a sample CD once in a track called OK on my first album! I am however a total sucker for drum sounds and I have thousands of kits from various sources. I also use a lot of orchestral samples, mainly M Vitous and more recently VSL.

FL – What is your normal setup when producing music? If Future Loops was to have a peek at your laptop what software would we definitely find open?

My laptop is my live computer so it´s focussed on Ableton, though I have Max and Logic on there too. For production I have a Mac Pro and generally use Logic and a program called Kyma which has its own dedicated hardware too, kind of like a beefed up Max. I also have a lot of softsynths, though I´m pretty particular about what I buy, and I´m now much better at just buying the things that I´l actually use. I also have Finale for scoring work. FL-Do you have a favorite VST plugin? What´s the audio hardware of your dreams (and do you have it yet)? OK this is an easy one. I´ve been a big evangeliser for Madrona Labs Aalto as I just think it´s simply hands-down the best softsynth out there. I appreciate it´s maybe not for everyone, but for me it´s perfection. The hardware of my dreams is actually related as it would be a Buchla modular (on which Aalto is loosely based). However that would probably cost more than my house so I´m not too hopeful.

My best advice is to take something and go as far as you can with it, go crazy with the production and effects and be as creative as possible with that one element, and then gradually tone it down and start to control it to make it more useable. That way you will learn a lot about the effects you have, and lots of new technique, and you will end up with interesting sounds.

FL – When you first started producing music almost 10 years ago what software/hardware were you using ? And what changed the most in terms of your workflow while producing music since then ?

I started with Logic and I´m still with it. It´s just a tool and now I´m used to it I won´t change. I had a mac G4 which my gran bought me for my 21st, so without her help I´m not sure whether I could have made much progress. I just had a few softsynths, and mainly I used the Logic ones, as well as some cheap M Vitous string samples. Now I spend much longer working on each element, though I still work fast as speed for me is the essence of creativity. If I toil over something too long, it loses its freshness. My workflow hasn´t changed that much really.

FL – Dexter Sinister stands out as a highly useful set of ready to use samples but it also has an undergound and almost mathematical feeling to it. Is sound-design; constructing and engineering sounds a big aspect of your productions?

yeah I love sound design, and the sample library was a chance to really experiment with sound. This is the single biggest change in my focus over the years, in that I spend a long time engineering the sounds now.

FL – How do you see dance music and genres like techno today and where do you think it is evolving to ?

It´s good to see there´s a lot of cross-pollination between genres of music that were once considered separate, and that is a healthy thing I think. I do worry though that everyone is reaching saturation point in terms of how much music is on the market and how much time we all spend listening to it everywhere at all times. Electronic music is now also a lot more mainstream, so it´s always interesting to see what happens to counteract that, as there always has to be an underground....and that´s where the creativity happens.

FL - In conclusion a word to the Future Loops and Alex Smoke fans out there. What are in your opinion the highlights of “Dexter Sinister” and how do you see it being used?

I can´t tell you what the highlights of my own sample library are! As for how it´s used, I think there´s a lot of texture in there, so the loops can act as starting points for people, to be thrown into samplers and loop-manglers and re-arranged. They´ll still retain some original character.