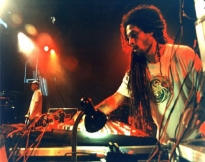 Neil Perch is the founder member of Zion Train Sound system and the owner and administrator of the Universal Egg, Deep Root and Category One record labels. He also owns and runs the Abassi Hi Power sound system and produces the internationally broadcast roots and dub radio show Deep Root. Zion Train are Dub/Dance pioneers and have been undisputed leaders in the genre for more than 15 years. The band are heavily involved in alternative and DIY underground culture and have been since the 90s as well as being purveyors of the finest Roots Reggae music throughout this period .

FL - Dub is a genre that was groundbreaking in many of its ways to use effects and sampling into the process of music making. Looking at how the first Dub tracks were made and how one can make them nowadays, what would you say are the biggest differences, and as much changed since?

The biggest difference is that dub was originally derived from songs – composed and played in the standard way. Modern dub is often composed as dub, whether it is acoustically performed or electronically composed – for me that is a great difference and as a consequence lots of modern dub lacks the melodious content of earlier dub.

The similarities are that dub producers have always been renowned for pushing the limits of their studio technology to produce new and weird soundscapes – King Tubby and Lee Perry did this and we still do it today.

FL - Are you an avid sample digger yourself?

I am but I also like to make my own samples/audio clips by recording new sounds and manipulating them. I also recycle some of my previous material to develop new sounds

FL - What is your normal setup when producing music? If Future Loops was to have a peek at your laptop what software would we definitely find open?

Logic Audio Pro is my most important software tool although I also use Bias Peak and Propellerheads Reason regularly, less regularly I use Recycle. Nowadays I am also doing more sound to picture stuff so Final Cut Pro also comes in useful. You will also always find I Tunes open on my laptop as I am always listening to music also.

FL - Software as come such a long way, do you still have the need for any hardware? If so, what gear can´t you do without?

I believe software will never replace hardware – they serve different purposes. For me digital emulations of effects units are usually inferior to the original machines. My work involves the dynamic use of effects in real time – the whole point of creative music is that it happens real time – plug ins cannot do this. I have a collection of 20 vintage effects units and that is irreplaceable for me. However as far as dynamic processing goes then plug ins and software are the direction I always choose nowadays – so I have sold all my hardware limiters and compressors for example. I also use software for static effects such as a reverb that does not alter throughout the duration of a composition.

FL - On “Dub Drums Vol 1 “you offer hundreds of real drum loops and rolls. Do you want to tell us the story behind those sessions?

The main session is from Vedran Meniga – a very talented Croatian drummer who plays with the band Radikal Dub Kolektiv who are signed to my Universal Egg label – this was all recorded in 2006 in Cologne in the Zion Train studios.straight to hard disc. Dave Ruffy of the Ruts, one of the most talented drummers in the world plays one of the other sessions which was recorded in London in 1996 in protocol studios to 2 inch 24 track analogue tape– both of these sessions were recorded for Zion Train albums and since then the material has been snipped, clipped and manipulated a million ways.

FL - When you are using drum loop samples, do you normally like to slice and process them a lot or do you prefer to use the raw sound?

I much prefer the raw sound, however I also cut and splice drums – it really depends on what I am trying to achieve in the composition – everything is possible ;-)

FL - On the other hand on “Zion Train Dub Selections “ you created tons of Construction Kits with drum-machine type beats. How would you compare real drums versus electronic beats?

Again it depends on the composition – dance music and some of the more digital dub styles require digital drums – that is their nature, they are electronic music and so electronics drums fit them better. Real drum sounds fit more organic compositions alongside other acoustic instruments. For dub dance compositions I myself like to use a combination of the two sounds which gives a third, richer texture.

FL - A very interesting aspect about “Zion Train Dub Selections” is the FX folder, where your technical side is more visible. Do you consider yourself a sound designer, and how much importance do you give to the exploration and experimentation of sound?

Every musician is a sound designer ;-) My musicality comes from machine manipulation rather than a conventional acoustic instrument so I am sure that my technical side becomes visible at times. Exploration and experimentation in sound is truly important especially in dub and electronic music but also in genres such as jazz and new classical music – for me music and sound are indivisible – trains and motorways make music as much as birds and flowing water do – whether all this music is to everyone´s taste is a different matter… Sound is music, music is sound…

FL - In conclusion a word to the Future Loops and Zion Train fans out there. What are in your opinion the highlights of “Dub Drums Vol 1 “and “Zion Train Dub Selections “and how do you see them being used?